The group self-released their debut EP, Smartbomb EP, in June 2007. The EP was produced by Front Line Assembly/Noise Unit’s Chris Peterson. Their debut LP, Fighting for Voltage, was released in April 2008 on Synthetic Sounds in Canada, and a Canadian tour followed in support of the album. Bit Riot Records picked up the rights to the release of Fighting for Voltage in the USA and released the album in September 2008. On March 3, 2009 and again via Synthetic Sounds the band released their second full length album entitled Voltage 2.3: Remixed and Revisited. The album featured three new songs; “Welcome to the Future” with covers of “Territorial Pissings” by Nirvana and “She’s Lost Control” by Joy Division; along with remixes and segues. In January 2011 the bands fourth music video was released for She’s Lost Control which made it into rotation on MuchMusic in Canada. The band has toured North America extensively with Revolting Cocks, SNFU, 16 Volt and Chemlab and opened for groups such as The Birthday Massacre, Combichrist, DOA, Genitorturers and Front Line Assembly.

In May 2011 Left Spine Down signed with Metropolis Records. They released their second full length album, Caution, on August 23, 2011 which was preceded by a new single and video for the track “X-Ray”. The album was produced by well known industrial music producer Dave “Rave” Ogilvie and features the band as a four-piece stripped down from their previous incarnations as a five and six-piece band. 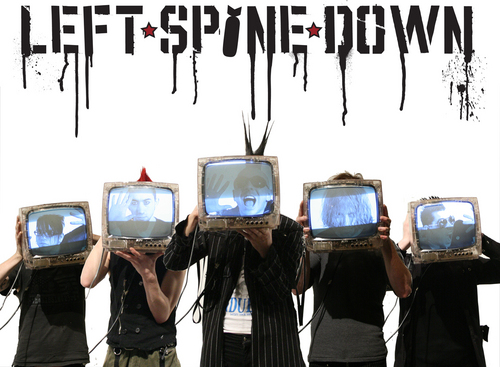